Empowervate CEO is one of the M&G 200 Young South Africans! 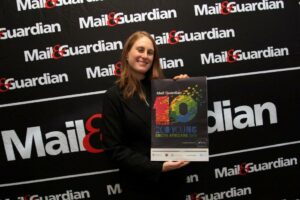 Pictured here is Founder and CEO of Empowervate, Amanda Blankfield-Koseff – one of the 200 Young South Africans featured in the Mail & Guardian newspaper supplement 31 July 2015 #MG200Young 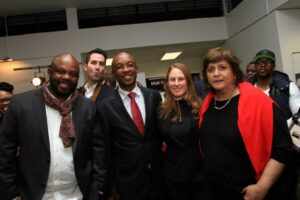 Pictured above are: The MD of Kaya Fm, Greg Maloka; Executive Mayor of the City of Johannesburg, Cllr Parks Tau; Founder and CEO of Empowervate, Amanda Blankfield-Koseff and Editor of the Mail & Guardian, Angela Quintal

In the Education section, Amanda Blankfield-Koseff is one of the 200 Young influential South Africans:

And the Rising Star is Lukhona Butshingi, the YCAP 2014 from the Eastern Cape provincial winning team and Great Effort winner at Nationals 2014

In 2006 the Mail & Guardian, then under the editorship of Ferial Haffajee, released the first edition of Young South Africans, featuring 100 notable South Africans under the age of 35.

Since then the publication has evolved, from the early days when the names shifted from year to year but familiar faces seemed to repeat on a regular basis to the no-repeats rule that we currently use. The numbers have also varied, from 100 in the first edition to 300 in 2009 and now to 200. The style of the profiles has evolved from short and sharp biographies to slightly more personal and in-depth profiles of people on the list. The categories have also changed but for the past few years it has settled on a list of 10 categories that allow us to select a cross-section of exceptional young South Africans.

This year regular readers of Young South Africans will spot two new categories. The first is a look back at some of the people who have featured in Young South Africans over the past nine editions, in an Alumnus section. People like Trevor Noah (2010), Julius Malema (2009, 2010), Lauren Beukes (2009), Michael Jordaan (2008) and Bryan Habana (2007), among others, are just a few of the around 2000 people who have made the list in the past nine editions.

The second new section is what we call Rising Stars. Each year we get nominations for young people who are still at school but who don’t make the main list, mainly because they lack the experience of others on the list. This does not diminish the magnitude of their achievements and so we created a category just for them this year.

Each year we put out a call for nominations and this year we have been impressed with the quality of nominations coming from the public, telling us, once again, how much the readers of the M&G value the Young South Africans project.

The M&G is especially proud of this project, because over the years we have profiled people who have gone on to achieve amazing things and this year’s list is no different.

We have artists, lawyers, scientists and environmental activists, we have people driving education forward as well as those pushing the boundaries of health and technology, sometimes simultaneously. Not all of these people are living in South Africa and not all of them originally came from South Africa, but they all have a strong belief in the future of this country.

At the same time as working on this edition we have gone back and loaded the past nine editions into a new site
200YSA.mg.co.za. Here you will find every profile we have published in the past nine years as well as the 2015 edition.

We will continue to seek out and highlight amazing young South Africans and give our readers a look at the people who are making a difference and driving the country forward.

Get in touch with us

Your donations make a difference. Support our next generation.

Get involved, we are stronger together as a team.

Support us by purchasing some cool merch.

Signup to the Empowervate Newsletter.