Last weekend was the National Championships of the Youth Citizens Action Programme. Solomon Mahlangu High school from Eastern Cape was crowned the 2015 Youth Citizens Action Programme (YCAP) national winner in the secondary school category for a project that tackled late coming at their school. In second place was Dlangezwa Secondary School from KwaZulu-Natal, which focused on introducing a Healthy Lifestyle at the school, and managed to change the boarding house menu from being dominated by fried food, to a healthy diet of lean meats and vegetables. The third position went to Northern Cape’s Postmasburg High for fencing in the graveyard across the road from their school where social ills were running rife. 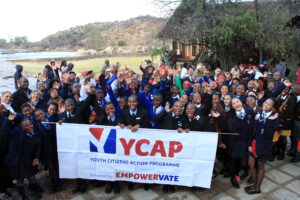 YCAP is a competition where learners present projects they’ve undertaken to improve a particular problem they’ve identified in the school. This was the 6th annual event, and for the first time included a primary school category, which was won by Gauteng’s Silverton Primary school for creating a “Mad Geeks Club” to encourage more learning through peer-to-peer tutoring at their school. In second place, Madibeng Primary from North West for their collect a text book campaign and Akofang Primary from the Free State for their awareness campaign on the dangers of abusing substances.

The competition, which took place at the weekend in Parys, Free State, brought together the provincial winners from all nine provinces. Topics ranged from social to academic and environmental issues and the participants found creative and innovative solutions to address them. The YCAP Programme provides learners with skills and confidence to make positive changes in their schools and communities instead of feeling hopeless and powerless.

The panel of judges included Constitutional Court Judge Edwin Cameron. “It was a great pleasure and quite a privilege to be an adjudicator at the YCAP Nationals. The projects presented by the learners were inspiring and humbling. And the event itself was bursting with positive, forward-looking energies,” he said.

The Programme is run by the NGO, Empowervate, which partners with the Department of Basic Education. Speaking at the event, Director of Social Cohesion and Gender Equity, Dr Shermain Mannah, encouraged learners and their educators: “When we listen to you, we have a hope that we will have a better South Africa.”

The HOD from the Free State Department of Education – SG: Education, Mr RS Malope presented the prizes to the winning schools.

CEO of Empowervate is Amanda Blankfield-Koseff, who founded and has run Y-CAP for the past six years. She thanked the major donors, Deutsche Bank South Africa Foundation and UTi Mounties SA, prize sponsors SpecCon and Sorbet, as well as partners Heartlines and the International Youth Council. UNISA is the pro bono research partner. “The awards element acts an incentive and serve to acknowledge the hard work all the participants have put into their projects. The key elements that the adjudicators look for in a winning project are innovation, impact and sustainability of the project.”

The top three winning schools submit a wishlist of what they would do with R10 000, R7500 or R5000 (in the secondary category) and R5000, R3000 or R2000 (in the primary category). Y-CAP then visits the schools to ensure that the money will be well used. In addition this year, each of the two winning schools won an accredited Microsoft Word, Excel and Powerpoint e-learning course for the whole school worth R1 million, sponsored by SpecCon. The first place winners from each category also received tablets.

Get in touch with us

Your donations make a difference. Support our next generation.

Get involved, we are stronger together as a team.

Support us by purchasing some cool merch.

Signup to the Empowervate Newsletter.