We had a wonderful Musical Variety Show in aid of Empowervate on Sunday 4 August in the afternoon at the Auto & General Theatre on the Square in Sandton City.

It was a variety concert with pop, Broadway, and easy listening jazz. We had Michael de Pinna (Best known for the Vodacom adverts – “Yebo Gogo”), Cindy Alter (from famous band Clout – “Substitute” was a huge hit internationally), Tony Yoko (jazz drummer performing with his band) and our CEO Amanda Blankfield-Koseff also showed her singing talents. It was such a fun afternoon. 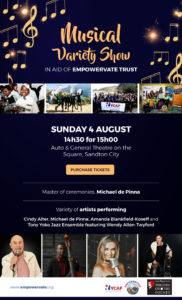 Biographies of some of the performers:

Cindy Alter’s rise to fame began in 1977, when she joined an all-girl band that became ‘CLOUT’, a band that broke all
the barriers of international boycotts, charting at #1 throughout Europe, hitting #2 on the UK top 100 and # 58 on the Billboard top 100. ‘Clout’ shared the stage with iconic bands, Supertramp, The Police, KISS, Dire Straights, Boney M, Blondie, Gloria Gaynor, Thin Lizzy, Van Halen, the Village People and many more, and they toured Europe for 4 years.

After the 14 million album-selling South African band, disbanded, Cindy started The Cindy Alter Band. Cindy  is an incredible singer, performer, author, a songwriter,  internationally renowned musician, a cancer survivor, and a human being with an
enormous heart. Music is her passion and her first and biggest love. She will be playing her latest original song – Last one Standing.

Apart from being known as South Africa’s favourite yuppie, “Yebo Gogo,” in the popular Vodacom series, British born Michael has performed internationally at the Lido in Paris, Sun City, and countless other cabaret stages throughout the world.

He is well known in SA for his starring roles in a variety of Musicals, Plays, including TV and Film. Michael has just completed filming “The Wedding Party 2 Destination Dubai” in which he starred as Geoffrey Winston in Nollywood’s largest grossing film ever.

Amanda always loved singing and music. She started regular guitar and ad hoc singing lessons at the age of 10 and has been playing pop, light rock, jazz, flamenco and a touch of classical music ever since. She has been teaching folk and pop guitar to a dozen children and teenagers at any one time since she was 18. Amanda has been in three bands that have performed across Johannesburg since 2010 – Jaded Moon, Velvet Moonlight and currently, she sings and plays guitar in 3Play Band with seasoned musicians Trevor Muller (bass guitar) and Rob Domijan (drums). In 2017 Amanda resumed regular singing master classes at the June Kraus Academy with June Kraus herself and in 2018 with Michael de Pinna. She was a singer and debuted as a musical theatre actor in the JJWT’s production of an adaptation of The Sound of Music, called The Power of Song in June 2019. Amanda is the Founder and CEO of Empowervate Trust, which celebrates its 10th Anniversary in 2019.