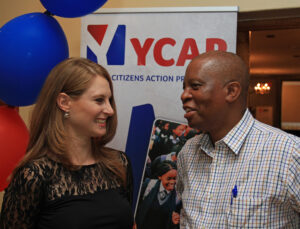 Thursday 19 March 2015. Woodmead, Johannesburg. The media launch and sixth birthday celebration of The Youth Citizens Action Programme (YCAP) took place today. The event was also where the announcement of the official collaboration between The Department of Basic Education and Empowervate, which powers YCAP, took place.

A video showing the successes from the past six years was shown, which included interviews with the partners from Deutsche Bank South Africa Foundation, UTi SA and Heartlines.

In 2009, when YCAP was born out of a series of youth dialogues held at NPO Afrika Tikkun, nobody would have predicted how impactful and widespread this new programme would be. In 2014, the showcase event of YCAP took place in Durban and the top teams from each of the nine provinces presented the action projects they undertook at their schools. These winners were selected from district and provincial showcases where a total of over 3600 learners in more than 360 schools took part.

YCAP is a programme through which grade 10, and now also grade 7, learners from schools across the country create projects aimed at addressing social, academic, economic or environmental issues which they have identified in their schools and communities. These issues range from low pass rate, absenteeism, drug abuse and teen pregnancy to lack of food security and pollution.

“In a nation where youth unemployment is a growing concern, YCAP is a valuable tool in encouraging young people to take an active role in identifying and addressing issues facing their schools and communities,” explains Amanda Blankfield-Koseff, Founder and CEO of the Empowervate Trust, the NPO which powers YCAP.

“We have noticed that our society has a strong victim mentality, but through YCAP, learners are empowered and motivated to be the proactive change they seek for themselves and their schools and even their communities.”

“A definite highlight this year has been the number of past participants and even members of the public, who want to volunteer their time as part of our YCAP Support Team. They have said that they have seen that through YCAP – that they could achieve significant things when they put their minds to it.”

Guest speaker, Herman Mashaba, made a plea to the adults in the room to give our youth a bright future by not focusing on race anymore. He says it has been 21 years since the end of Apartheid, and yet there are still racial divides in our country, which is hindering our economy and opportunities for our youth.

“YCAP has already changed thousands of lives,” concludes Blankfield-Koseff, “Not only those of the participants, but also of all the beneficiaries of the projects they’ve implemented. We look forward to expanding the programme to more schools when we get more investors. We are so grateful to our partners and sponsors who make YCAP such a success each year.”

These learners won an essay competition and were chosen to speak at the event about how YCAP impacted them:

Two educators spoke about how YCAP has benefitted their school and learners:

The Deutsche Bank South Africa Foundation is Empowervate’s founding sponsor, having supported the YCAP Programme and Big Talk since the first youth dialogue in 2007. Latest sponsors since 2014 are UTi SA Mounties Division who have given Empowervate the opportunity for expansion. The Department of Basic Education is our collaborating partner since 2009, which was made official in 2014, along with other non-profit organisations, materials and support partner NPO Heartlines, and research partner UNISA who gave a presentation on the 2014 results of the evaluation of skills gained by learners through YCAP.