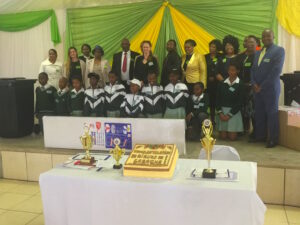 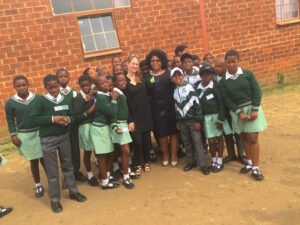 Isibukosabasha Primary School from Hlathi Dam area outside of Dundee in KwaZulu Natal are the 2016 National Youth Citizens Actions Programme (Y-CAP) primary school champions for their innovative and wide-reaching health and safety project.This included making their school taxi transport safer, their kitchen more hygenic; and saving of water by reusing handwashing water for other purposes.

Isibukosabasha Primary School won prizes valued at R5 000 from the school’s wish list. These included shelving for their kitchen storage as well as four wheely bins from Mpact and Tupperware containers donated by DSV branch staff. The learners and their teacher committed to continuing to improve health, safety and other issues in their school well into the future using the skills they learned from Y-CAP. Empowervate also promised to assist with a storage solution for the kitchen, which is located in a container at present. The Provincial Coordinator from the KZN Co-Curricular Services from the Department of Basic Education made a speech where she acknowledged the principal, teachers and learners for their achievement. We appreciate the contribution of one of Empowervate’s core sponsors DSV Mounties for the Kick Start events and prizes! 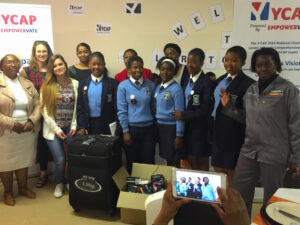 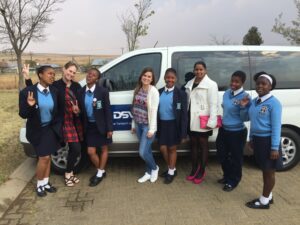 Twelve girls who had dropped out of their Free State school because they had fallen so far behind their peers because they were forced to miss school for one week every month, have returned and are continuing their studies thanks to an upliftment project implemented by their school mates.

Lerato-Uthando School’s Y-CAP team tackled the issue that has long plagued girls in disadvantaged communities: a lack of access to sanitary pads which results in girls staying home from school during their monthly menstruation. The Y-CAP team not only identified the issue, but formulated a plan to obtain donations of sanitary pads. They also formed a Girl’s Club support group to discuss hygiene, sexuality and emotional issues.

At their Kick Start event at their school, the district coordinator for values in education directorate for the Free State Department of Basic Education said a speech where she acknowledged the achievement of the principal, teachers and learners, and she thanked Empowervate for the programme that empowers and motivates them to become active citizens. Then the team was presented with items on their wishlist worth R10,000 – two pull up banners to spread the word about their campaign, a laptop wheely bag for their laptop and projector so they can make presentations at schools in their district, and 20 sanitary bins for their school from Sanitech as they did not have any. We appreciate the contribution of one of Empowervate’s core sponsors DSV Mounties for the Kick Start events and prizes!

We wish these two amazing schools all the best for the sustainability of their projects!